A Coruña and the Celts. 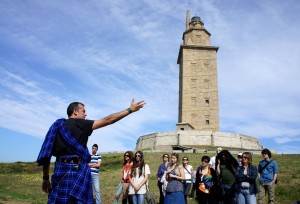 Breogan had a restless will of counting the stars.
And he erected a tower on a rock.
Ramón Cabanillas.

Galicia is the O´Brian, Bregon, Breogan´s home. Acording to the Irish Legendary Cycle, recording from the Middle Ages of milenary tales, specially the Book of Invasions, Bregon discovered the green line of the Irish coast beyond the sea from the top of his tower in Brigantia (Corunna). Acording to the same legend, after the death of Ith, Milled, who had been in the service of Bregon, conquered Ireland with his troops, the Milesians, the firt historical Celtic People of the island. After the Conquest, the Romans named the O´Brian´s tower the Hercules Tower, other mythical heroe who reached the top West using the boat of the Sun (Simbol christianized under the form of a chalice-boat and a host-sun, represented in the coat of arms of Galicia) settled in Corunna, declared World Heritage by UNESCO. 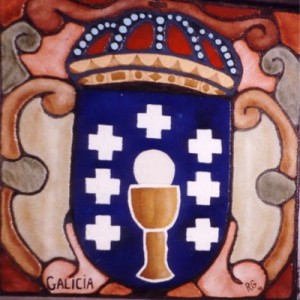 Coat of Arms of Galicia. Is the Chalice a Cup of the Sun?

The memory of this origin still stands in times of the last Celtic Counts generation. After the defeat of the Battle of Kinsale (1602) and the Tudor conquest of Ireland, several Gaelic leaders fled and were exiled in Galicia[1] followed by supporters and catholic bishops, like Red Hugh O´Donnell and Donald Cam O´Sullivan Beare. O´Donnell visited the abandoned in that time O´Brian´s Tower as a homage to his ancestors, and the O’Sullivan clan claimed a descent from the mythological followers of Mil who were the first Celts to colonize Innis Fáil, their «island of destiny». 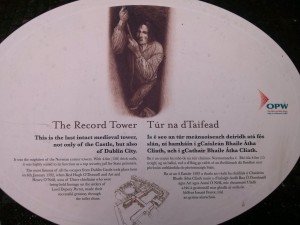 Red Hugh O´Donnell after Kinsale left Ireland for A Coruña.

Before the arrival of the Milesians, Ireland was colonized by the People Tuatha De Danan or People of Dana (Tuatha or treba in Galician), which carried the Lia Fail or Stone of Destiny which is still the Coronation Stone of Westminster conserved in the Edimburg Castle. Acording to the old tradition, the granitic stone was moved from the Land of Death, which it´s the Land of Life and Light as well, the kingdom of Brigantia (Bergantiños is the name of the vast county  around Corunna). A fact which was represented into the chairs of the Assembly Hall of the Palace of the Town Hall of A Coruña. 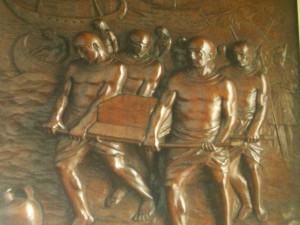 Milesians and the Stone of Destiny carved at the Meeting Hall of A Coruña.

[1] We must to stand out the Saint Patrick College of Santiago de Compostela, established in that moment by the archbishop of Cashel, a real “martyrs school”.