The Flight of the Earls. Rome, A Coruña and Valladolid

After the Siege of Kinsale on January 1602, with the Hiberno-Spanish capitulation was signed too the end of the Gaelic prominence in Ireland. Her main chieftains, leaders of the revolt, fled for Spain or its several territories. It was the final goal for the exiled earls: Hugh Mor O´Neill lord of Tyrone, Red Hugh O´Donnell of Tyrconnell and Donald O´Sullivan of Bearehaven. It was known as the Flight of the Earls.

A plaque at the remainds of the Franciscan monastery

A Coruña was the residence of two capital actors of Kinsale: Red Hugh O´Donnell lord of Tyrconnell and the Spanish Maestre de Campo Juan del Aguila. O´Donnell became the head of the Irish party and Corunna concentrated the supporters of a continuation of the hostilities in Ireland where it was still the war against the English. A war led by Tyrone in the North and O´Sullivan Beare and William Burke in Munster.

After being welcomed to A Coruña by the Governor of Galicia Count Caracena, Tyrconnell died at Simancas aged 30 on the route to Valladolid. The Irish earl was serching the support of the Spanish king Phillip III for the Irish cause. It took place on november 1602.

His rests were caried to Valladolid to the Royal Court on a 4 weels coffin scorted by a large number of nobles of the Consejo de Guerra followed by the Royal Guard with flaming torches. Red Hugh was buried in the chapter of the monastery of St. Francis with a great honour and respect on the most  solemn manner.

After the truce between Tyrone and the Queen, O´Sullivan fled for Spain to join with his family.

Donald O´Sullivan Beare, buried at A Coruña with his family.

In march 25 1603 O´Neill was in Dublin to meet the representants of the new king James. Tyrone did not know the dead of Elizabeth the day before. James agreed the policies done by Lord Mountjoy.

Eventually Tyrone left Ireland in the Flight of the Earls (1607) for the Spanish Flanders governed by Archduque Albert of Austria and his wife Isabel Clara Eugenia daughter of Philip II. Tyrone moved from Brussels to Lovaina, where wrote a letter to king James, but did not found support on the Spanish ambassor at London a Galician Count of Gondomar who carried an intense work for the Treaty signed with the English in 1605.

In 1616 O´Neill was forced to leave Lovaina to Rome, where dead sadly and hopeless aged 66 and interred as his brother in arms Tycornell in a Franciscan monastery, San Pietro in Montorio of the Ianicula Hill at Rome.

In 1618 O´Sullivan Beare was murdered just as he was leaving Mass in the Plaza de Santo Domingo at Madrid. The murderer was John Bath, a Dublin Englishman who had been desfigured in a duel by the prince´s nephew. As his brother Dermot (died aged 100) and nephew Phillip O´Sullivan, the great poet, soldier and historian author of the Historiae Hiberniae Catholicae, was interred aged 57 in the Franciscan monastery of A Coruña.

Tyrone, Tyrconnell and Bearehaven were Franciscan Tercian Friars and bueried tied hands with a Rosary. The Franciscan monasteries of A Coruña and Valladolid do not exist nowadays remaining only the memory and ruins.

Franciscan´s ruins at A Coruña 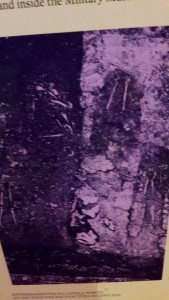 Interrments under a chapel of the old Franciscan monastery at A Coruña.